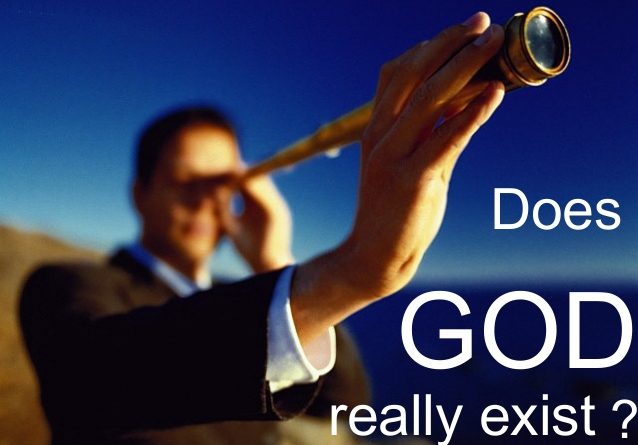 A consequence of living in a materialistic culture is the common misconception that if you can’t see or touch something (or buy it on Amazon), it isn’t real. This misconception influences people to reject belief in anything immaterial or supernatural. For instance, in schools, observable sciences like biology are taught over the unobservable, like philosophy or ethics. But we know that there are realities that cannot be seen or touched, like gravity or the laws of mathematics. In fact, we would never doubt them.

Why, then, when we ask, is there a God, do we feel like it is an unanswerable question? Or even further, why do we think that there is obviously no God, since we don’t have him in a test tube, sitting in a lab? In his book Letter to a Christian Nation, prominent atheist Sam Harris said, “Atheism is not a philosophy; it is not even a view of the world; it is simply an admission of the obvious.” In Harris’ eyes, atheism—the disbelief in a god or gods—is so obvious that the opposing view, theism, is too absurd to discuss.

But what if there is a God? How could we know? Not unlike the example of gravity, we would need to look for the effects of God in the universe to determine whether or not he exists. When we see a baseball fall to the ground after being dropped, we have observed the effects of gravity—but not seen gravity itself. When we see the trees swaying back and forth in the breeze, we have observed the effects of the wind—but not seen wind itself. In both cases, we draw the best conclusions from an observable fact. So are there any “God effects” to be seen if we look? In fact, there are.

One effect is the design of the universe. The fact of the matter is the universe has intricate design. But what is the best possible explanation for this design? Well, there are basically two possible explanations: either a designer designed it purposefully, or it developed arbitrarily over a long period of time. Most atheists will subscribe to the belief that, given enough time, chances are, anything can happen (in this specific case, anything meaning everything); or, as the Infinite Monkey Theorem states, “a monkey hitting keys at random on a typewriter keyboard for an infinite amount of time will almost surely type any given text, such as the complete works of William Shakespeare.” There are many inconsistencies in this ideology, but just remember that it is one possible explanation for the intricate design of the universe.

Alternatively, theists argue that the universe’s design implies a designer, a designer called God. This argument is called the teleological argument, which comes from the Greek word Telos, meaning purpose or goal.  It states:

Intelligence is best explained by a designer.

Therefore, the universe’s specific, purposeful design is best explained by a designer.

Or (for the logicians out there)

This argument is valid, which means that if the first and second statements are true, then the conclusion is true. So is it true that design implies intelligence? And is it true that intelligence is best explained by a designer? To answer these questions, let’s explore a few examples. Virtually everyone is familiar with Van Gogh’s Starry Night; in fact, it’s considered one of the most famous pieces of artwork in the world. No one in their right mind, though, would see Starry Night and assume it just appeared on the canvas, a blob of aesthetically arranged oils and pigments. No, because there is no Starry Night without a Van Gogh.

Similarly, no one has ever ridden in a vehicle assuming that it just gathered itself into a functional machine over time. No one has assumed that because there are no Jeeps without engineers. A Jeep, like the universe, is both intricately detailed and purposeful, which means that every designed piece aids in the overall function. Why, then, would we think the universe is exempt from this principle of purposeful design? It’s not exempt. Design always implies a designer. That’s why intelligent design just makes sense.

STEIN: “What do you think is the possibility that Intelligent Design might turn out to be the answer to some issues in genetics or in evolution?”

DAWKINS: “Well, it could come about in the following way. It could be that at some earlier time, somewhere in the universe, a civilization evolved, probably by some kind of Darwinian means, probably to a very high level of technology, and designed a form of life that they seeded onto perhaps this planet. Now…that is a possibility, and an intriguing possibility. And I suppose it’s possible that you might find evidence for that if you look at the details of biochemistry, molecular biology, you might find a signature of some sort of designer.” 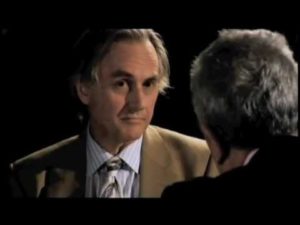 It’s surprising, the verbal somersaults Dawkins does to avoid admitting that God is a possibility as intelligent designer; such evasiveness is not good science— it’s not pursuing the best possible explanation of facts— but rather a blind denial, similar to Harris’ unwillingness to open up the discussion to God. The idea that atheism is not even a worldview—it’s just right—is neither open-minded nor intellectually honest.

The best explanation for the purposeful design in the universe is God. He is not conjecture. He’s real. He is not faith-based. He’s real. Few people would say, “I don’t believe in gravity.” Gravity is just there; it exists. In the same sense, God is as real as gravity (which sounds silly; of course he is—he created it!). But the point is this: you don’t have to believe in God any more than you believe in gravity in order for it to exist. Both God and gravity are real. How do we know? We draw reasonable conclusions from observations made about the world we live in. And the world we live in is God’s world. Every created thing has a purpose and an intricate design, including you.