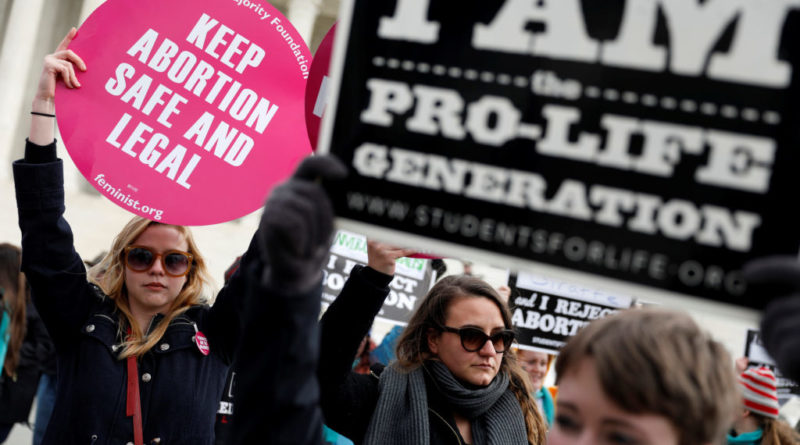 An American outcry has erupted recently in response to newly legislated restrictions on abortion in certain states. Outraged, public figures have gone so far as to boycott Georgia, an entire state, in protest. Why have the American people fought so hard against abortion restrictions and pushed so vehemently for full-term, easily accesible abortions for all?

They claim it is a woman’s right to choose, and granted, no one acquiesces to being stripped of their rights. Their opposition, however, claims that fetuses should be protected under the label of human rights as well. At the end of the day, both sides appeal to the greater authority of Human Rights, but whose rights are right?

Before analysing the touchy, and often even personal, subject of abortion, we must cover common ground between both sides. Abortion is defined as the “deliberate termination of a human pregnancy.” Pregnancy is divided into three trimesters: the first spanning weeks one to twelve, the second, weeks thirteen to twenty-seven, and the third, week twenty-eight to birth. Again, both sides appeal to Human Rights as lending weight to their respective arguments.

Aside from these few facts, however, disagreement, and even name-calling or personal attacks, abound. Though the recent public backlash seems to be in response to legislation, the pro-life vs pro-choice debate (These are arguably poorly chosen titles, but for the sake of commonly-used terms, they will be used here.) represents a deeper philisophical impasse. First of all, each must answer the question, when does life begin?

Three major theories about the beginning of life are in play. The first, commonly held by pro-lifers but widely dismissed, holds that life begins at conception. The next view claims that life begins when a heartbeat is detected, which occurs around eight weeks; additionally, during week eight, “the embryo becomes a fetus, all structures present in rudimentary form.” (Geneticist Ricki Lewis, PhD on DNA Science Blog, When Does a Human Life Begin? 17 Timepoints) Finally, others hold that when a fetus has a chance of survival outside the womb, around 21 weeks, it is living. Notice that all of these definitions of life indicate life begins before the 22 week mark.

So how does abortion work? There are two main types of abortions: medical and surgical. Medical abortion offers a pill, causing the woman to bleed and lose the embryo or fetus, which would otherwise — had it not been intentional– be considered a miscarriage. Surgical abortion removes the fetus by a vacuum or manually. According to  an experienced ex-abortionist, Dr. Anthony Levatino, “A second-trimester D&E abortion is a brutal, inhumane procedure… Let’s just say that they call it dismemberment abortion for a reason.” (Fox Host at Point of Tears as Former Abortionist Describes 2nd-Trimester Abortion, CNS News) 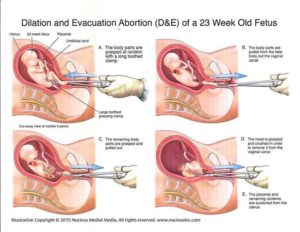 Purposeful termination of a human life has a name: killing. According to all three of the above definitions of life, termination of a pregnancy in the third trimester is killing an innocent human being. To deny that is to deny that the fully-formed fetus, with a heartbeat and even the ability to feel pain, is a person. Yet somehow, seven states offer third-trimester abortions, and over 25 states offer second-trimester abortions. As Levatino explains so clearly, these babies are being dismembered and their body parts reassembled on a doctor’s tray; simply because they are surrounded by amniotic fluid and a political dispute, they are not protected by this great authority we call human rights. It’s inhumane. It’s unacceptable.

Modern Western culture values expedience over ethics. Such moral depravity is not limited to an abortion problem. In fact, it affects everyone. When one lies about a colleague to gain a promotion, for instance, expedience is valued over ethics. The fact that it is accepted, even celebrated, to terminate second- and third-trimester pregnancies, and with them, innocent children, points to the ethical corrosion of an entire society. It screams through a megaphone, “I’m more important than you! My happiness, convenience, comfort, etc. are more important than the next person’s.” In some cases, even more important than the next person’s life.

Such a mindset actually implicates all of us. After all, the lying coworker subscribes to the same philosophy as the aborting mother. This truth should change the way we hold pro-life vs. pro-choice conversations. First of all, pro-choice supporters and activists must face the “when does life begin?” question head on; otherwise, they are blindly endorsing killing, and if they aren’t, they need to prove it. It would also benefit them to appeal to statistics and reason rather than appeals to emotion or petty personal attacks.

Secondly, pro-lifers must be just that: pro life. The other side has made it explicitly clear that pro-lifers are often hypocrites, supporting fetuses in the womb but neglecting them afterwards. Granted, people cannot be perfect, but they can be consistent. They must also support the lives of mothers who feel they want or need an abortion; many of them have suffered domestic or sexual violence, or they are entrapped in poverty, or they feel unsupported and unprepared for a child. Most importantly, if anyone dare advocate for the lives of the unborn, they must root out the expedience-over-ethics ideology from their own lives– the philosophy that says personal convenience is more important than what is right.

Remember, both sides of this argument feel they are standing up for human rights: pro-choice, for a woman’s right to choose abortion, and pro-life, for a baby’s right to live. Because these sides are opposed to one another, they often fall prey to the either-or myth. Human rights is a wide umbrella, wide enough for both sides to take shelter from the rain of injustice. In other words, a child’s right to live and a woman’s right to health care can coexist– so long as the woman does not encroach upon, or end, the life of another.

The only way to remedy the injustice of abortion is to protect life at all stages and to fight against a mentality which prefers oneself over others. As George Orwell put it when describing injustice in his allegorical satire, Animal Farm, “All animals are equal, but some are more equal than others.” In this clear, satirical wording, it is easy to agree that inequality is wrong. But can we adopt this mentality when it applies to the abortion debate?

One thought on “Ethical Or Expedient? The True Philosophy behind Abortion”