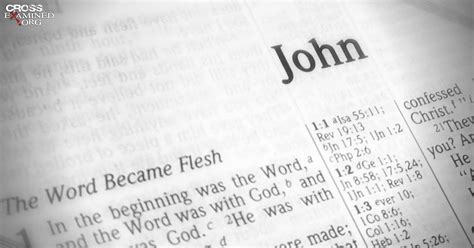 John’s gospel is considerably early, historically accurate, and it aligns with the synoptic gospels on Jesus’ identity. Why, then, does it get thrown out as a valuable piece of history and a real authority on the life and teachings of Jesus of Nazareth? Let’s explore the reality behind John’s gospel before dismissing it as just “the latest gospel” or just “not a synoptic.”

Perhaps one of the most disputed facts amongst New Testament historians is the dating of John. For years, scholars claimed that John, a result of copious legendary development, was not written until the second century. But the evidence disproves that theory. One of the earliest documents of the gospels scholars have today is actually a portion of John 18, discovered in Egypt. The papyrus contains parts of verses 31-32 and verses 37-38.

Scholars date this scrap, called The Rylands Papyrus 52 (P52), between the reigns of Emperor Trajan and Emperor Hadrian, who governed Rome between the years AD 98 and AD 138 . Thus, John must have been written much earlier. That’s why even a skeptic like Bart Ehrman dates the gospel around AD 95 . As New Testament scholar Bruce Metzger put it, “Here we have, at a very early date, a fragment of a copy of John all the way over in a community along the Nile River in Egypt, far from Ephesus in Asia Minor, where the gospel was probably originally composed.”

In addition to being an early account of the life of Jesus, John accurately records details that would not have been recorded in a legendary account. Similar to the other gospels, John mentions thirty-nine towns, twenty-five regions, eight bodies of water, and four other places, for a total of seventy-six geographical references. That’s virtually impossible to fabricate. Archaeology also confirms the authenticity of John. For instance, John 5 relays the story of Jesus healing an ill man at the Pool of Bethesda, which is a real place in Jerusalem; it has five colonnades, exactly how John describes it . Another example is Jacob’s well, which is mentioned in the Old and New Testament. John 4 records Jesus’ encounter with the woman the well – Jacob’s well—which remains in Israel to this day . Both geography and archaeology confirm that John’s gospel is not just a result of legendary development, but it must have been written by someone who was deeply familiar with Judea—someone just like John.

Finally, though many try to argue that Jesus’ identity is different in John than it is in the synoptics, that assumption breaks down after further study. Ehrman poses the question this way:

“In the Gospel of *John* Jesus does, repeatedly, claim a divine status for himself: ‘I and the Father are One,’ ‘Before Abraham was, I AM,’ ‘If you have seen me you have seen the Father,’ and so on. These sayings are found only in John, not in Matthew, Mark, and Luke. That seems very odd if the historical Jesus really went around making such claims about himself.”

We’ll discover that Jesus’ character aligns in all four gospels. First of all, only in John does Jesus claim “I AM,” right? Wrong. It may seem this way because of English translation, but in both Matthew and Mark, the exact same Greek wording is used. As Jesus says in John, “Before Abraham was, I am,” so he says in Matthew and Mark when he is walking toward the fearful disciples, “Take courage! I AM.” In Greek, the words for I am, ego eimi, are used in all three of these passages. In a Jewish culture, this was an undeniable divinity claim on all accounts.

Let’s look further into Jesus’ identity. There are three things that Jesus does in the gospels that, in a Jewish, monotheistic culture, only God could do: forgive sins, accept worship, and pronounce judgment. In Matthew, Peter explicitly calls Jesus “The Christ, Son of the Living God.” Both Matthew and Mark record the story of Jesus healing a paralytic by declaring “your sins are forgiven.” Although some claim that this was not spoken on divine authority, Jesus’ contemporaries definitely understood it that way; we know this because the Pharisees were angry. In fact, in all the gospels, Jesus is accused of blasphemy. How can he be accused of blasphemy if he isn’t claiming to be God? He can’t be.

There is a rock solid cumulative case for the historical authenticity of John, from early testimony to meticulous detail to overall coherence between gospel narratives. Many would like to reject John’s rich theology by denying its historicity, but to do so is simply intellectually dishonest. All four gospels record Jesus’ identity in a unique light but with the same central message: Jesus claimed to be God and his earliest followers certainly believed that about him. Scholars, historians, skeptics, lay readers—stop dismissing John’s gospel. It’s far too valuable! And it demands a response to the age-old question: what will you do with Jesus?