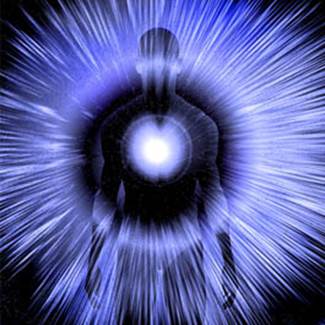 This is a response to an article written by atheist blogger, Forrest J.S. Schreick critiquing my points made in the debate on the existence of the soul. You can read the full article here. 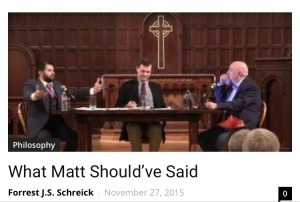 Let me first say that I really enjoyed reading this. It’s evident that the author, Forrest Shcreick, truly understands the nature of the topic and how to address it. It was refreshing to see someone actually engage the debate at a philosophical level. I think it’s safe to say that in all honesty, Schreick would have been a much better suited opponent for this debate than Matt.

I’ll address the less relevant objections first and save the best (how the soul interacts with the body) for last.

In this section he states, “The problem here is that Mr. Hernandez appears to implicitly set up a dichotomy between substance dualism and reductive/eliminativist materialism. However, no such dichotomy exists. The various positions in the philosophy of mind are legion.” I actually agree with him on the last two sentences. I 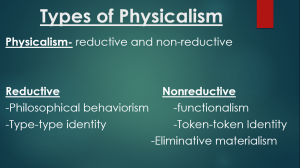 am completely aware of all the various positions in the philosophy of mind debate. I even put up a slide of all the different forms of a physicalist alternative to dualism which can be seen here at the 35:22 time mark.

However, seeing how my preparation for this debate was against Matt Dillahunty, I only addressed the relevant points that Matt would, or rather, should have presented. So I was not setting up a false dichotomy. I was simply aiming at my opponent’s position, which is what one should do in a debate. If I were debating a Muslim, I wouldn’t bring up objections to Buddhism. Thus my focus was on Matt’s position and not every other form or alternative to mine.

This would equally apply to his section on intentionality. I am well aware of the other forms or alternatives to my position. But once again, my focus was on Matt’s position, not any other position. So when Shriek states at the end, “I hope that I have shown that there are views in the philosophy of mind that Matt could’ve pointed to

that accept Eric’s premises and not his conclusion.” I completely agree with him. I too wish Matt would have brought more substance to this dualist debate (pun intended). However, I would have had rebuttals to all those positions as well.

“The Problem of interaction between the Soul and Body”

Causal closure is roughly the view that every physical event has a physical cause. He goes on further to say, “All explanations in the natural sciences appear to confirm the causal closure of the physical. We would need very good reasons to reject CC.”

A few things to be said about this. First of all, I completely agree with the last quote. I do not reject causal closure for things that are wholly physical. However, if a person is more than just physical, then causal closure does not apply with the soul/mind and body interaction. This was exactly the point (or at least should have been) of the entire 2 hour debate on the existence of the soul. 3 minutes into my opening 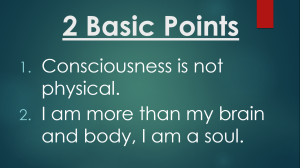 statement I openly addressed that I would be arguing that I am MORE than merely my brain and body. If my arguments are true, which I of course think they are, then it would prove that I am not wholly physical and therefore, causal closure could not be used as an objection.

Secondly, simply saying that we don’t know how the soul interacts with the physical body is not an argument against dualism. If anything, it is an argument from ignorance. Just to be clear for those unfamiliar with the philosophical jargon, this is not an insult to his character, but a phrase used to point out a flaw in his argument. To simply say “we don’t know” does not prove that it is not possible. After all, I may not know how or why some “x” interacts with some “y” but this in no way proves that “x” cannot or does not interact with “y”. So even if this were true it wouldn’t prove the dualist interaction false.

Moreover, Shreick used an example of playing billiards to explain causal closure. He does a fine job at explaining interaction until he gets to himself. He says,“Why did my arms move? My brain sent signals… What caused my brain to send those signals? Other neural firings….And so on.”

So far I agree with all of this…until he says, “And so on”. The “and so on” part is exactly the questions at hand. We would agree about all the physical interactions, but it’s the “and so on” that is the sole, or soul, (pun intended) problem that we are trying to address. So still, no solution on his part is given.

One final thing to note concerning causal closure. As I said, if persons are more than purely physical beings, then causal closure cannot apply. And if on his view, only physical explanations are allowed to explain things, then things like paintings, 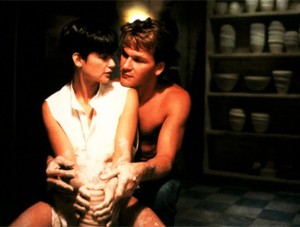 sculptures, books, and even the very article that he himself wrote cannot be explained by appealing to a personal agent! But clearly that is absurd. If I raise my hand, surely I can explain that action by saying, “I did it!” However, on his view, you cannot use persons as explanations if persons are more than physical. So once again, we are back to the very question of the debate in the first place.

His response to my solution to the problem of interaction:

So there HAS to be a stopping point to all series of actions that start with a basic one and then progress onward. If there is no basic action, then nothing can be accomplished. His response to my answer for the soul-body interaction was simply, “This answer is not very satisfying”. Well…that’s not a rebuttal. That is merely an assertion.

My critique of his response:

What many people don’t understand is that the issue of the soul has profound implications if it exists and profound implications if it does not. If there is no soul that interacts with the body, then this rules out the possibility of free will. I can’t cover it here in detail, but if there is no first cause that is NOT physical, then all your actions are determined by prior physical events.

Imagine a line of 1,000 dominos. All things being equal, none will fall unless there is someone to act and initiate the process. This has profound implications because if 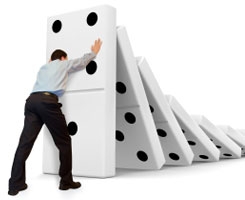 there is no free, nonphysical cause that is the originator of all your actions, then there is no free will. Therefore, EVERYTHING that is done was not your doing, but merely a cause of some prior event or action that took place far before your birth. Even to the very beginning of the universe.

So in summation, causal closure applies to wholly physical things. If a person is not merely a physical thing, then his objection fails and is shown to be question begging. Second, if there is no non physical interaction via a soul, then there is no free will, no possibility of rationality and persons are merely a collection of physical parts defined by physical stuff. All of which I have just tried to show cannot be the case.

Thanks again to Forrest J.S. Schreick for taking the time to give an honest and unbiased critique of the debate. For more articles by Mr. Shreick, click here.

For those who have yet to see it, click here for the full debate.

5 minute highlight review (with added humor) on physicalism in the debate, click here.

For a hilight review of mine and Matt’s disagreement on scientism in the debate, click here.