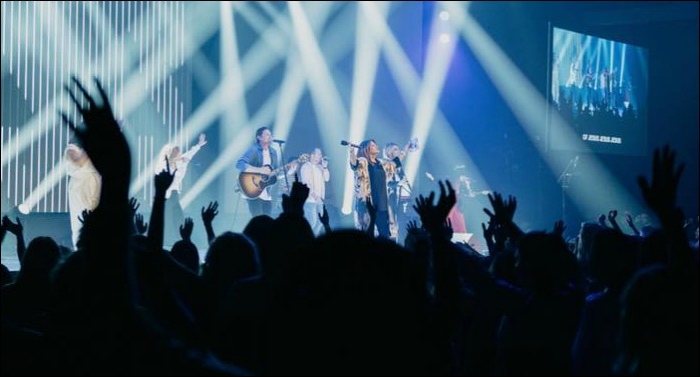 Or is it crazy? The internet descended on Marty Sampson and on Hillsong Church in varying shades of comments, articles, and answers. But there is something generally unsettling about just how unsettled the global church became when one man doubted God.

Most of the responses discussed online, or even seen in private social media posts, fell into two categories: judgment or panic. These two categories seem to be the fallback of many Christians (or at least many spectators) when a major church leader falls or questions, or even overtly sins. Just recently, the world has been shocked by the tragic suicide of pastor and mental health advocate, Jarrid Wilson. No doubt, people will be equally vocal concerning his death in days to come.

The voice of judgment rings so loud and so harsh in these situations that it’s nearly impossible to ignore. It’s as if some people seemed actually pleased by Marty Sampson’s announcement, taking it as an opportunity to pounce. “I knew Hillsong was a cult!” they declare. Whether or not false doctrine is in play is irrelevant to the heart of this particular issue, though.

Here’s why judgment and personal attacks are an unacceptable way for the church to respond: judgment is a festering symptom of pride. In the case of Marty Sampson, other Christian leaders were quick to attack, accusing him of intentionally leading others astray; this type of aggression towards doubters only comes from people who think they have all the answers. Similarly, the Pharisees led from a cynicism that was birthed in self-righteousness and superiority towards others—especially the spiritually lost, confused, or taken advantage of. Jackie Hill Perry, author and speaker, summed up the heart of Christian criticism:

“If your theology and the abundance of it is making you mean, arrogant, condescending, quick to speak, and elitist, you have and idolatry problem.

There will be some to quickly point out that brothers and sisters are meant to keep one another accountable in the church. While that’s entirely valid and true, in the case of doubt, accountability looks much more like leading them to truth and answers (which several notable apologists endeavored to do in Sampson’s case) than pointing fingers and shaming. It looks more like lifting Moses’ arms when he was too weak to hold them than tossing him onto the battlefield to be trampled by the enemy. Support and accountability within the church looks more like “how can I help you?” than a flippant I-told-you-so concerning doctrine. Yes, teachers and leaders will be judged weightily by God—what better reason to help them walk in the way everlasting to the best of our ability as a church?

Then there are those who quickly panicked. Singer/songwriter for Hillsong church? Who’s next? Ultimately, they wonder, what will the world think of Christians now? Although this seems like a deeply spiritual response at first glance, it smacks of yet another heart problem. The Sadducees, who Jesus frequently rebuked alongside the Pharisees, were political leaders of the Jews. Instead of maintaining their role of serving the Jewish people in their care, they tended to obsess over keeping peace with Rome. When Christians care more about their appearance to the world than the responsibility God has given directly to them, they have an idolatry problem that says man’s opinion is more important than God’s.

So what do we do when leaders lapse? When the media attacks and parades the failings of human beings? What is the response of a person whose heart is right before God? Keep first things first: we don’t serve a movement called Christianity; we serve a Lord called Jesus Christ. “As God is exalted in his right place, a thousand problems are solved all at once.” (A.W. Tozer) Secondly, we repent. We, as the Church, and especially as the Western Church, repent of the widespread judgment and idolatry that have been accepted for far too long. They’re unacceptable before God.

Finally, we declare what we stand for more than what we stand against. When Christ is the foundation—not Hillsong church, not theologians, not even the local church—then his bride will not be shaken. People will still doubt God and challenge him; they have always done so, and he has never changed. Why? God is not a product of people’s words; people are a product of his. Truth cannot change. If Jesus is the Truth, no man can change that, only discover it.

Christine Caine, ironically also of Hillsong church, summed up the problem and the solution of this issue in the church:

“Too many with the microphone have led too many to themselves and not to God, and then when they have decided to overtly stop following Jesus, people have kept following them. Our job is not to connect people to us or to our gift or to our album sales, but to lead them to Jesus, who’s on most high. So then if you decide to take a wrong turn, people aren’t going to follow you. They are going to follow him.”

One thought on “When Leaders Lapse”