A recent study by Pew Research Center found that “Most U.S. adults now say it is not necessary to believe in God to be moral and have good values (56%).”[1]  Another study by Barna Research revealed that 89% of U.S. adults believe you should not criticize someone else’s life choices.[2] The president of the Barna Research group interpreted the data of many 2015 surveys on morality to mean that “The highest good, according to our society, is ‘finding yourself’ and then living by ‘what’s right for you.’” These studies are just a few of many examples of society’s increasing acceptance of relative morality. 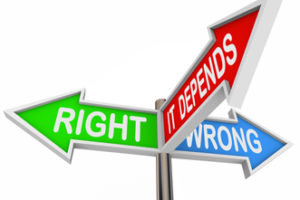 Traditionally, there are five theories about morality.[3] First of all, individual relativism, as the name suggests, claims that each person decides their own moral values. You’ve probably heard of this belief system via the phrase “what’s right for you is right for you.” Cultural relativism suggests that society determines morally acceptable or inacceptable for each individual. Next, the error theory is the belief that it is wrong to claim to know morality; right and wrong are always undefined.   A less common belief is the evolutionary theory that humans developed moral convictions through Darwinian processes. Finally, the moral theory that challenges all the others is objective morality—the belief that right is right for all people, in all, places at all times.

Which theory about morality is true—meaning it corresponds to reality and coheres as a whole? First of all, the error theory is, ironically, in error because it self-contradicts. It claims that there is no right moral position, but the theory is, in itself, a moral position. Thus it is incoherent.

Secondly, cultural relativism is not a strong theory because, when followed to its practical end, it cannot condemn any individual or group for acting along the standards of its culture, like the communists or Nazis; nor can it applaud any rebels who risked their lives to fight against an oppressive, malevolent system. Gas chambers? Starving people? Massacring the next tribe? According to cultural relativism, it’s all acceptable if society promotes it.

Additionally, the idea that humans evolved into moral creatures is actually inconsistent with survival of the fittest because the human conscience is often in opposition to survival.[4] For instance, if a soldier throws himself onto a grenade to save his fellows, it’s considered heroic/right but clearly the opposite of survival. Demonstrably, the evolution theory doesn’t correspond to reality. Neither do any of the above arguments on morality.

Finally, two options remain. Is morality individually determined or objectively discovered? Many people, as the research points out, believe that what’s right for them has no bearing on what’s right for you, and vice versa. But let’s explore the implications here. If this were true, then the judge in the Larry Nassar sexual assault trials could rule not guilty on all accounts. After all, Nassar was acting out his own personal “what’s right for me.” Further, if correctness always corresponds to pleasure, then why should sexual abuse, or any other crime from which a criminal finds enjoyment, be considered wrong? 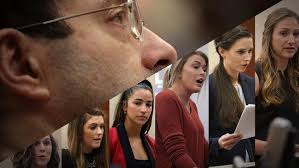 But the judges ruled guilty. Of course they did! Otherwise, the ruling would be a gross and distorted miscarriage of justice. There is no such thing as right for you, or fluid, shifting moral standards. We can deduce from the example and other scenarios that this is not how reality works, and if it did, there would be no remaining justice or goodness. Imagine a world like that! The only remaining possibility for the coherent, real truth is an objective morality. There is a standard of right and wrong. By that standard and authority, Nassar was sentenced to 175 years in prison, and rightly so.[5] Why? Because evil is evil in any place, at any time, committed by any person.

But where does morality come from? That question has been fueling deep discussions for years. Many people have pointed out that, even if we don’t know what the source of morality is, we can discern right and wrong from a young age. We refer to our consciences, the inner compasses that point North or maybe induce a stomach ache when we lie. But if our consciences are like compasses, they must be pointing toward a true North.

We call that true North the standard of goodness and justice. The reality of this standard is compelling evidence for God’s existence. Even Dawkins admitted “The moral law is a reason to think of God as plausible – not just a God who sets the universe in motion but a God who cares about human beings, because we seem uniquely amongst creatures on the planet to have this far-developed sense of morality.” Dawkins sums it up perfectly: morality points to a unique God who created humans uniquely to reflect him. Genesis calls this being “made in his image.” [6]

The moral argument can be demonstrated logically as follows:

Apologist Greg Koukl once put it simply in an analogy: if we see road signs for a speed limit, those limitations are evidence of a government. In the same sense, when we discover evidence of the moral law, it points directly to a governing power—to God. Now please note that God can’t just invent any law and call it good. He could not have created a world in which murder was righteous because that would violate his character as the standard of moral perfection. Because God is good and morally perfect, we have a standard by which to judge. C.S. Lewis famously summed up the moral argument when he wrote about his personal conversion to Christianity,

“My argument against God was that the universe seemed so cruel and unjust. But how had I got this idea of just and unjust? A man does not call a line crooked unless he has some idea of a straight line. What was I comparing this universe with when I called it unjust?”[7]

[4] Tanya Walker, Is Anything Wrong?,  https://www.rzim.org/read/just-thinking-magazine/is-anything-wrong

[5] Eric Levenson, Larry Nassar Sentenced to up to 175 Years in Prison for Decades of Sexual Abuse, https://edition.cnn.com/2018/01/24/us/larry-nassar-sentencing/index.html